Let’s omit the fundamental concepts about this group of contraceptives (they are described in the last article) and move on to the essentials.
What worries women more and more often when deciding on the long-term use of oral contraceptives? Weight gain. But gynecologists are worried about thrombotic complications when using this method. Let’s sort it out in order, reassuring you and us.
To begin with, the balance of risk and benefit has been confirmed by a large number of studies, but still the word “hormones” still manages to instill fear in a woman.

First, the “terrible” estrogens lower the concentration of cholesterol and reduce the content of atherogenic lipoproteins. Secondly, the XXI century is in the yard, and now there are no high-dose combined oral contraceptives. The currently used drugs contain a small amount of those same estrogens and are metabolically neutral, that is, your figure is safe.

Thirdly, if we are talking about thrombotic complications, then the risks (with the correct selection of the drug) are not higher than with smoking, long flights, extensive operations and in the postpartum period. There is also a nocebo effect (occurs if a drug without pharmacological action causes a negative reaction in the patient).

There are several large groups of drugs, and depending on your complaints / established diagnosis / desired result, the gynecologist can choose the ideal one.

What is needed for the appointment of COC
No hormone tests. Yes! We do not need to know the baseline in order to prescribe oral contraceptives. And you need:

Interview you. Thoroughly, meticulously, in detail and with passion! There are questionnaires for a more convenient conversation, but you can simply collect an anamnesis of your life and diseases. Please, come to the doctor, trust him, tell about the past illnesses, about the diagnoses, the drugs taken and bad habits. We can only help if you see the full picture.
You also need to measure blood pressure (we are alarmed not only by hypertensive states, but hypotension, that is, a decrease in pressure).
Inspect. This includes a gynecological examination on a chair and an examination of the mammary glands (with an ultrasound of the mammary glands for women under 35 or mammography if you are older).
Assign a coagulogram (to assess blood clotting) and a biochemical blood test (the level of glucose, lipoproteins, cholesterol, bilirubin and liver enzymes is important there).
Take a smear for oncocytology from the cervix and for examination for STIs.

Now to the main questions.

When and how should you start taking oral contraceptives?
Ideally, the start should coincide with the first day of your menstrual cycle. You can also start taking it later (no later than the fifth day of the cycle!), But then for the next seven days you need to use an additional method of contraception (preferably a condom).

After an abortion? Reception immediately. Used a vaginal ring but changed your mind? Pulled out – started taking combined oral contraceptives or also after a seven-day break. Have you used the injection method? On the day of the planned injection.

How long can you take the pills and do you need a break?
Considering how far medicine has gone, and the low (15 and 20 mg) dosages of ethinyl estradiol, it is possible to start taking oral contraceptives at the same time as the onset of sexual activity, and end with the onset of menopause. You don’t need to do any contraceptive holidays!
Breaks are needed for the onset and gestation of pregnancy, after which you can safely start taking it again. Regarding the “ovarian rest” breaks, this is a misconception.
The folliculogenesis process does not stop due to blocking ovulation (the main effect of COCs). Moreover, please note: the greatest number of side effects of oral contraceptives occurs precisely in the first year of taking the drug! Especially when it comes to thrombosis. That is, taking breaks, you reset your term and return to the risk group.

How to “quit” a trick?
There are no flowing circuits. Have you decided it’s time to have a baby? Finish your pack and don’t start again. You can get pregnant in the next menstrual cycle – don’t waste time. The ovaries do not need time to recover, and the hormonal background does not need to return to some kind of norm.

Are COCs protecting the ovarian reserve? Are they saving eggs?
No and no. We create an artificial menstrual cycle during which follicles and eggs are also produced. I will say more, they also die in the same way as in ordinary life, if pregnancy has not occurred.

Is Irregular Menstrual Cycle Treated With COCs?
Combined oral contraceptives don’t cure anything, but they do help manage your symptoms.

They are used for:

severe forms of PMS (premenstrual syndrome),
acne,
prevention of functional ovarian cysts,
PCOS (polycystic ovary syndrome),
endometriosis,
abnormal uterine bleeding
painful periods.
But this does not mean that COCs will cope with foci of endometriosis on organs or cure a polyp that leads to bleeding.

Side effects of oral contraceptives 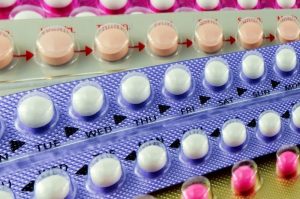 Now on the other side of the coin: side effects. It seems to me that it is the COC in the annotation that lists the largest number of possible “side effects”, including death, and there are reasons for this. What are the most popular unpleasant surprises in store for you?

Weight gain. The most common question and fear of a woman. Weight fluctuations are usually insignificant (about 2-3 kg). If you gain more, then most likely it is due to increased appetite. Numerous studies have not found strong evidence of the hormones’ fault (again, again, dosages are now minimal and do not cause huge weight gain).
Breast sensitivity, nausea, headaches. These effects are temporary and are the “adaptation” of the body to what is happening. Most often, the above concerns in the first three months of admission. If the troubles persist longer, contact your doctor, this is all corrected by the doses of hormones in the preparation. By the way, you can get rid of nausea on your own by changing the time of admission and doing it strictly after meals.
Change of mood and mood for life. It also depends on the correct choice of contraceptive. Each woman tolerates taking the drug in her own way, which is why you should not self-medicate and use the advice “I drink these COCs, for you.”
Decreased libido. Sufficient frequent complaint. “I wanted to protect myself from unwanted pregnancy, and not from sexual activity at all” … COCs reduce the level of testosterone in the blood, and it is he who is responsible for libido. If the problem persists for more than three months of taking, then you can reduce the level of ethinylestradiol, replace the progestin component, or completely refuse to take oral contraceptives in favor of a patch, spiral, vaginal ring.

Amenorrhea is the absence of a menstrual reaction after drinking a pack. This is the result of changes in the endometrium, which is the expected norm. Most often it occurs with continuous pills, that is, they drank for 21 days, but did not take a break (such a scheme is also possible). First of all, pregnancy or tablet-taking disorder is always excluded. If all is well, but neither you nor your doctor is happy with this, a switch to higher estrogen dosages may be recommended.
As you can see, “the devil is not so terrible as he is painted.” With a competent approach, you can avoid the “harm” of oral contraceptives, get not only reliable contraception, but also improve the quality of life.