The prevalence of hyperglycemia (increased blood sugar) in pregnant women in the world reached a frequency of 1 in 7 people, which is a lot! (this is 36.2%).

Of these 36.2%, there are differences in the reasons for the increase in blood sugar:

– 7.4% – the debut of other forms of diabetes (often monogonous, associated with a mutation in 1 gene, like MODY diabetes, there are at least 14 types of mutations).

In the postpartum period – what happens to these types of glucose metabolism disorders: 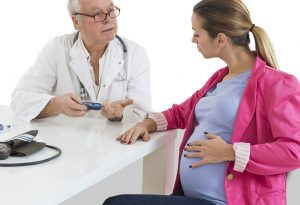 – 21% – outcome in diabetes mellitus of one type or another, additional diagnosis is required

GDM during pregnancy is complicated by:

postpartum hypoglycemia (drop in blood sugar) in the fetus and neurological complications,

fetopathy (aging of the placenta)

This turned out to be fundamentally important, since pregnant women with normal weight more often have mutations in the GSK gene – the glucokinase gene of monogenic type of diabetes mellitus MODY 2 (this is not type 2 diabetes and not type 1 diabetes, this is such a subtype of SD – a separate form). The GCK mutation accounts for 32% of all cases of MODY diabetes (the most common in pregnancy).

Mutations in the HNF1A genes are also common – 52% (Cg-MODY 3) and the HNF4A gene – 10% (Cd-MODY1). They are less likely to manifest themselves in onset during pregnancy.

What distinguishes these women before genetic diagnosis (clinically), even before pregnancy:

In these patients, a mutation in the GSK gene occurs in 80% of cases.

It was a great help to the doctor if mutations were detected during pregnancy.

Why is this necessary? This will make it possible to decide which tactics for managing a woman to choose and whether she is threatened with complications against the background of an increase in blood glucose.

the fetus will actively respond to maternal hyperglycemia (with poor treatment) by producing large doses of insulin in its pancreas, which will lead to complications – fetal macrosomia, etc. Strict adherence to the diet of the pregnant woman and insulin therapy are required if indicated!

the fetus “perceives” the mother’s hyperglycemia as normal and there is no excessive production of insulin in his pancreas, and when this pregnant woman is treated with strict low-carbohydrate diets, this will lead to intrauterine fetal growth retardation !!!!!

the fetus will actively respond to maternal hyperglycemia (with poor treatment) by producing large doses of insulin in its pancreas, which will lead to complications – fetal macrosomia, etc. Strict adherence to the pregnant woman’s diet and insulin therapy are required if indicated!

Patients with diagnosed T1DM, T2DM, MODY 1 and 3 even before pregnancy should undergo preparation for pregnancy with insulin therapy !!! And keep it for the entire duration of pregnancy !!!! Sugar-lowering drugs during pregnancy on the territory of Russia are prohibited! We are not in the USA!

In the forecast, unfortunately, half of children from parents with MODY 1 and 3 will develop diabetes mellitus (the population is rapidly “aging”;) at the age of 25, their brothers and sisters (with MODY 1 and 3) will develop diabetes before the age of 55 years in 96%. Don’t get confused – this is not CD2 or CD1, these are monotonous forms of diabetes (they meet CD2 much less often !!!!!!!)

Factors that reduce the risk of developing GDM (diabetes in 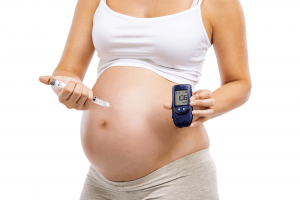 No smoking !
Shown physical activity for 150 minutes per week of medium intensity
Healthy eating – no light carbs!
Keep weight in check -> BMI less than 25
Taking Omega-3 courses – normalizes the sensitivity of insulin receptors.
Taking myo-inositol in courses (especially with excess weight) – normalizes the sensitivity of insulin receptors.
SLEEP normalization !!! When the sleep time is shortened by 1 hour, it increases the glycemic level by 0.3-0.5 mmol / l !!
And once again about insulin therapy during pregnancy, it is shown:

inability to maintain target glycemic levels for 1-2 honey diets (fasting 5.1-5.3 mmol / l, 1 hour after eating – 7.0-7.5 mmol / l)
signs of diabetic fetopathy according to ultrasound
newly identified or growing polyhydramnios, with the exclusion of other causes
debut of diabetes mellitus with numbers over 6.7 mmol / L on an empty stomach, including in the presence of antibodies to the pancreas (to islet cells of the pancreas (ICA), to tyrosine phosphatase (anti-IA-2), to glutamate decarboxylase (anti-GAD), to insulin) (IAA)
Insulin is used during pregnancy

I prefer to work with extended insulin for GDM.

But when treating T2DM and T1DM, there is always a combination of prolonged and short insulins. I will also write separately about therapy and diet.